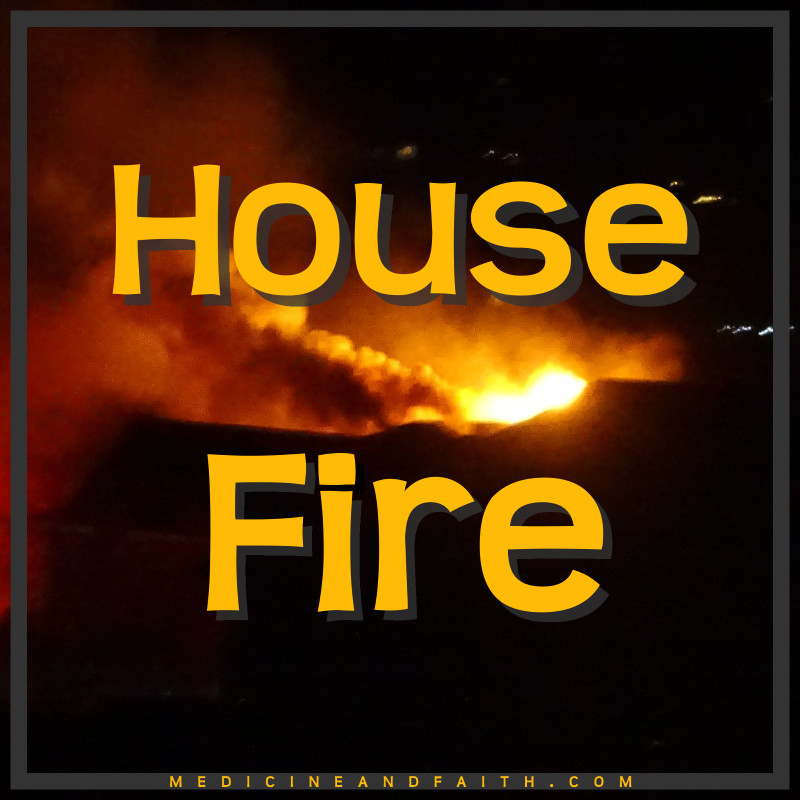 I worked at a fast food restaurant when I was a teenager. This was one of those jobs that taught me, in a thousand small ways, that I should stay in school and get good grades. It also taught me a few practical lessons, like how to use indoor grills and deep vat fryers.

Once while working the evening shift I had an unexpected visit from a friend. “My house burned down,” she said.

I looked at her in disbelief, but I could tell she wasn’t kidding. She even smelled like smoke. (I smelled like hamburgers.)

“What happened?” I asked.

“My sister left a pot on the stove, and it boiled dry,” she said.

Everyone was out of the house when the fire started, so thankfully there were no injuries or deaths. But by the time they noticed the fire it had already gutted their home.

A few days later I got a personal tour of the disaster. The parts of the house that were not completely charred were so damaged by smoke and water that essentially nothing was salvageable. I found a half-melted cassette tape in the ashes and kept it as a souvenir. This was my first experience with the devastating power of fire.

Recently I had a conversation with my daughter while we were on a road trip together. She listed some of the things she will look for when she is dating prospective husbands. “What should I add to my list?” she asked.

After pondering for a few moments I decided to give her a big picture view. “You’re looking for three things,” I said. “First is that secret sauce of similarities and complementary contrasts that somehow magically adds up to compatibility in your personalities.

“Second, one particular ingredient of that special sauce is so important that it is worth pulling out separately. That is, you have to have the same level of commitment to your faith and testimonies. You make the marriage covenant with each other and with the Lord, and if one of you doesn’t really believe in or care about the Lord then your marriage covenant won’t mean the same thing.

“And third, you have to have a strong physical attraction, because your intimacy is a major part of the glue that holds you together, and the gloss that smooths over the rough places in your relationship.”

The third point seemed to come as a surprise to her. “I’ve never really heard it said like that,” she said.

The first point, that mysterious and unpredictable personality match, is the subject of romantic comedies dating back to before Jane Austen. It’s been covered in depth elsewhere. The second point is driven home in Sunday School classes often enough, I suppose. But that third point — when do we ever talk about that? When is it even appropriate to discuss those things?

“Let me give you an analogy,” I said. “Sexuality is like fire in your house. Think of all the places in your home where you use fire: the hot water heater, the stove, the furnace. You wouldn’t want to live in a house that didn’t have these things. But you have to keep that fire within limits and boundaries, or else you will burn your house down. You can’t just make a campfire on your bedroom floor. Even in the places where fire is needed and wanted you have to be really careful to contain it.

“A similar logic applies to water. How would you like to live in a house that didn’t have a bathtub, or a toilet, or a kitchen sink? These things are wonderful luxuries that we have a hard time living without. But water in the wrong place is almost as bad as a fire. It’s easy to do tens of thousands of dollars in damage to a house within minutes if you have water in the wrong place. You have to keep those pipes and valves and drains in good working order.”

The Lord’s guidance for when and where sexuality should be utilized in your life is known as the law of chastity. Jesus discussed this commandment in the Sermon on the Mount and in a parallel address given in the ancient Americas as recorded in the Book of Mormon. Note his emphasis on keeping our thoughts and desires in check:

“Behold, it is written by them of old time, that thou shalt not commit adultery;

“But I say unto you, that whosoever looketh on a woman, to lust after her, hath committed adultery already in his heart.

“Behold, I give unto you a commandment, that ye suffer none of these things to enter into your heart;

Anything outside the boundaries must be squelched, like a hot spark that lands outside of the fire ring.

Discussions about the law of chastity sometimes fail to mention that sexuality is a good thing, if kept within limits. Not every sexual desire has to be stomped out — just the ones that are inappropriate. The prophet Alma in the Book of Mormon taught this concept to one of his sons using a different analogy:

A bridle is different from a hobble. The primary goal is not to suppress your urges, but to subject them to your control. Passions can motivate and empower you to do good and heroic and self-sacrificial things, if you will learn to be their master.

The law of chastity is sometimes given as a list of don’ts, but The Family: A Proclamation to the World gives a positive definition:

“We declare that God’s commandment for His children to multiply and replenish the earth remains in force. We further declare that God has commanded that the sacred powers of procreation are to be employed only between man and woman, lawfully wedded as husband and wife.

“We declare the means by which mortal life is created to be divinely appointed.”

I have seen several house fires since that first one I walked through all those years ago. I have also seen devastating floods leave houses uninhabitable. As dramatic as these events have been for the families involved, the consequences of improper sexual activity are even more impactful and tragic. Repentance will renew our spirits, but cannot remove all of the consequences of our past actions. The law of chastity is every bit as important as fire safety and building codes.

Our attention to God’s commandments on this subject will in large part determine the outcome of our lives. Boyd K Packer, former President of the Quorum of the Twelve Apostles, said it this way:

“To be entrusted with the power to create life carries with it the greatest of joys and dangerous temptations. The gift of mortal life and the capacity to kindle other lives is a supernal blessing. Through the righteous exercise of this power, as in nothing else, we may come close to our Father in Heaven and experience a fulness of joy. This power is not an incidental part of the plan of happiness. It is the key—the very key.

“Whether we use this power as the eternal laws require or reject its divine purpose will forever determine what we will become.”

Pick Up that Penny

How to Spend Less Time at Work while Increasing Productivity

My Brothers in Ukraine