Treadmills are boring. Running on a treadmill is only slightly better than not running at all. 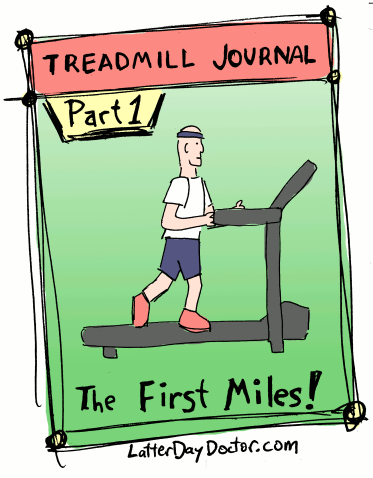 But sometimes the treadmill is my best or only option, because of inclement weather, family responsibility, or some other reason. This time of year when it is getting colder and darker outside I sometimes retreat to the basement to put a few more miles on my creaky old hamster wheel.

How does one occupy the mind during such a meaningless task as running nowhere? There are various tricks, almost all of which involve distracting yourself with some kind of audiovisual experience. I almost never listen to anything on headphones while running outside, but without music my treadmill workout would only last about 5 minutes.

A couple of weeks ago I went downstairs for a treadmill run after putting the youngest kids to bed for the night. I was listening to some pretty good swing jazz, an old Benny Goodman recording with a killer Gene Krupa drum solo, but within the first mile I was suddenly struck with the thought that I was wasting my time. Wasting my time?

But I’m getting a good workout, and listening to some great music! These activities are of good report.

“You could do better. You should listen to Conference.”

“But Conference is better. And I will keep nagging you until you do it.”

My conscience was right, and I had to concede the argument. I have been trying to do a better job of following promptings like this, so as soon as the Krupa solo was over I went to the Gospel Library app, found a list of Conference talks given by President Russel M. Nelson, and selected the oldest one.

Call to the Holy Apostleship – April 1984

President Nelson’s first Conference talk was given the day after he was called to serve in the Quorum of the Twelve Apostles, an assignment which apparently surprised and humbled him and his family. He had previously served as the General President of the Sunday School, and was intimately familiar with Spencer W. Kimball (as discussed below), who was President of the Church at the time. At the time of his call he was at the pinnacle of his career, a world-renowned heart surgeon who had been a pioneer in the field and had spent decades pushing the envelope of what could be done with open heart surgery. He referred to this professional work in his address:

“While nominally I come to you from the science of surgery and its mother of medicine, in a truer sense, I have been forged from the stern discipline of law—not the laws of men, as mastered by our brethren of the legal profession, but the eternal and unchanging laws of our Divine Creator. The surgeon soon learns the incontrovertibility of divine law. He knows that hopes and wishes are sometimes simply powerless sham. Desired blessings come only by obedience to divine law, and in no other way. My lifetime thus far has been focused on learning those laws. Only as the laws are known, and then obeyed, can the blessings we desire be earned. To this extent, there will be little difference for me in the activities of the past and those of the future.”

This theme of the surgeon learning and following natural laws is one that President Nelson has revisited many times in his Conference addresses over the years. For President Nelson there is no contradiction between religious and scientific truth. God is the creator of the world and of our bodies, and can reveal truths about medicine and surgery to a prepared mind just as easily as he can reveal his gospel and his commandments to the prophets.

I found particularly inspiring this statement of solidarity with Church leaders:

“I have implicit faith in the Lord and in His prophets. I have learned not to put question marks but to use exclamation points when calls are issued through inspired channels of priesthood government.”

Those of us who sustain our Church leaders echo that sentiment, because we love the word of the Lord and we love those who declare it to us. I have felt the urgency and importance of President Nelson’s teachings many times, and have tried to act on them as faithfully as I know how. (A couple of examples are here and here.)

President Nelson is still using exclamation points in this way. Consider his recent tweet, for example:

We are witnesses to the process of restoration. If you think the Church is fully restored, you’re just seeing the beginning. There’s much more to come. Wait until next year, and then the next year. Eat your vitamins, get your rest. It’s going to be exciting!

President Nelson’s second talk uses an analogy which was familiar to me. He described using electric hedge trimmers and accidentally cutting through the power cord while working. Any power tool with moving blades will very happily cut through its own power line if given the opportunity, and just last year my son ran over and severed the extension cord while using our electric lawnmower. Instead of throwing a tantrum, as many men would do in such circumstances, President Nelson immediately perceived the moral lesson taught by his experience: “‘Isn’t that one of life’s great lessons?’ I thought. ‘Power, if misused, can cut into the very source of that power.‘” (emphasis in the original)

“On one occasion when he [President Spencer W. Kimball] needed an operation that I was to perform, he first asked me for a priesthood blessing. Following that, he said, ‘Now you may proceed to do that which must be done in order to make that blessing possible.’
“He knew, and I knew, that not even for God’s prophet can anyone be exempted from law. Not even for God’s Son could divine law be broken!”

One line from this talk, in the section discussing how the Power of Love may be misused, is particularly direct and forceful:

“But as loud voices argue on, let us remember that those who advocate abortion have already been born! Those who freely deny God with their amoral and agnostic practices will one day find that He may just as freely deny them!”

President Nelson has a fearless way of denouncing evil, and we will examine this powerful skill in greater detail in my next Treadmill Journal. (Also note that his second sentence in the above quote is chiastic.)

Reviewing President Nelson’s first few talks as an Apostle has put some of his more recent teachings into perspective for me. He has been revisiting the same themes in his Conference talks for over 30 years, and there is a consistent thread running through them all. Teaching the gospel with medical stories and analogies is something I aspire to do as well, so his talks inspire me on more than one level.

By the end of President Nelson’s second talk I had run a little over 3 miles on the treadmill, and I felt great! Running has a way of making me feel awesome under most circumstances, but this was even better than normal because my heart and mind had been filled with the power of his wonderful teachings. I decided to make this a new habit, and since then I have listened to several more of his talks while running on the treadmill. They cover a lot of topics that I have been wanting to discuss on this blog, so I will continue my Treadmill Journal as a way to put a few exclamation points behind his teachings!