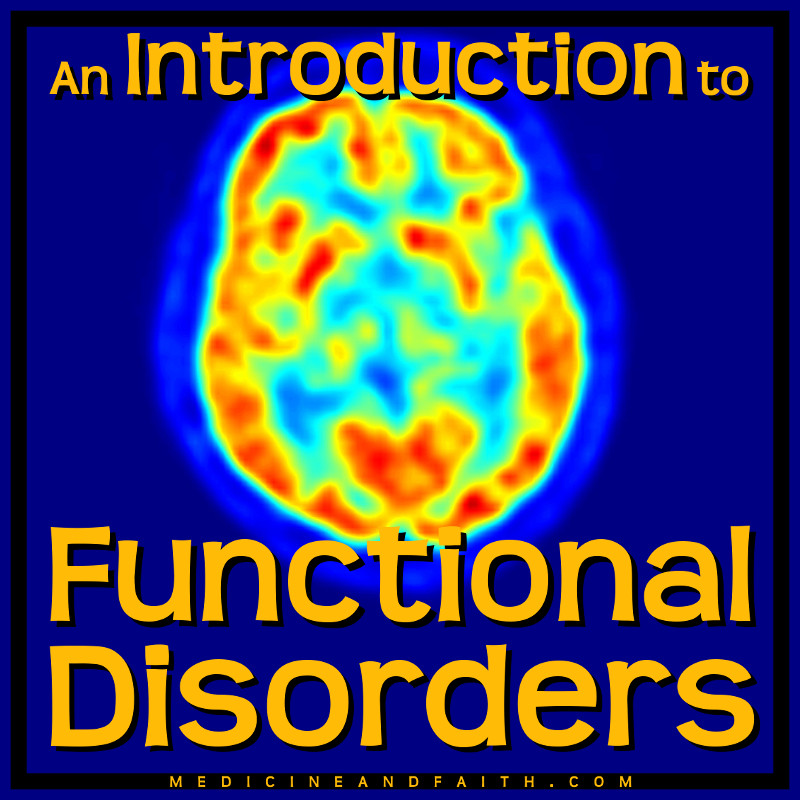 Imagine that you have to speak in front of a crowd of 1,000 people, including news cameras broadcasting your speech on live television. Most people would not be comfortable in such a situation. (I wouldn’t.) What symptoms might you expect to have in that moment? Would you get a tremor in your hands? Butterflies in your stomach, or abdominal pain? How about cold sweats? Stuttering? Dry mouth? And if we took your vital signs we might find that your heart rate and blood pressure are higher than normal.

Notice that none of these physical symptoms are under your conscious control. Your sweaty palms happened all by themselves — you can’t simply will them away. And they are directly caused by your mental state.

Experiencing your emotional state with physical symptoms is perfectly normal; everyone does this to a certain degree. Medical doctors and psychologists call this phenomenon somatization. “Soma” means “body,” so the word “somatization” means translating or converting an emotional symptom into a body symptom. It is just another one of the amazing things that the human brain can do.

Somatization happens because human consciousness (the mind) is the result of a functioning physical organ (the brain), which is connected to all other body organs and systems. A change in brain function, such as an altered emotional state (ex. embarrassment), causes a change in the function of other systems (ex. dilated blood vessels in the face, also known as blushing).

Every spectrum will have its extremists. There are people who somatize much more often than others, or who experience extreme symptoms when they do. These extremists on the somatization spectrum may experience symptoms so severe that they are distressing or even disabling. In the current nomenclature of psychiatric diseases these are known as somatic symptom disorders.

A few weeks ago I saw a woman with the most bizarre gait I have seen outside of a Monty Python sketch, but she wasn’t joking at all, and she wasn’t doing it on purpose. We had a long discussion about conversion reactions, and I explained that they are often associated with depression, anxiety, or other mental disorders. Some types of reactions, especially pseudoseizures, are strongly associated with a history of severe abuse. At this point in the conversation the patient exchanged a knowing glance with her sister who had accompanied her to the clinic, and this was a sign to me that I had made the correct diagnosis. But I silently grieved to see yet another casualty in the epidemic of mistreatment of women.

The Book of Mormon records the story of a man named Korihor who lived among the Nephites. He didn’t believe in their religion and became a traveling preacher of his particularly confrontational brand of atheism. Eventually this vocation brought him to an encounter with Alma, who was a prophet of the Lord.

“And now Korihor said unto Alma: If thou wilt show me a sign, that I may be convinced that there is a God, yea, show unto me that he hath power, and then will I be convinced of the truth of thy words.

“But Alma said unto him: Thou hast had signs enough; will ye tempt your God? […] And yet do ye go about, leading away the hearts of this people, testifying unto them there is no God? And yet will ye deny against all these witnesses? And he said: Yea, I will deny, except ye shall show me a sign. […]

“Now Alma said unto him: This will I give unto thee for a sign, that thou shalt be struck dumb, according to my words; and I say, that in the name of God, ye shall be struck dumb, that ye shall no more have utterance.

“Now when Alma had said these words, Korihor was struck dumb, that he could not have utterance, according to the words of Alma. […]

I remember reading this passage when I was a neurology resident and wondering what diagnosis I would give Korihor if he showed up at my Emergency Department. “Probably some kind of stroke,” was my initial thought.

At that point in my training I had seen a few hundred patients with different types of strokes. Broca’s aphasia is the most common language disturbance seen in these patients. Broca’s area, an important circuit in the lateral left frontal lobe of the brain, is a symbolic language encoder, taking abstract concepts and stringing them into the words, phrases, and sentences of speech. When a stroke damages Broca’s area, patients are suddenly unable to speak, just like Korihor.

“But wait a minute,” I thought. “If he had Broca’s aphasia then he wouldn’t be able to write.” You see, Broca’s area is a general-purpose language encoder; you use it whenever you are creating symbolic language by any modality. Speaking, writing, sign language — all of it requires a functioning Broca’s area.

So I revised my theory. “Maybe he had a brainstem stroke affecting the hypoglossal nucleus, or the facial motor nucleus.” These nuclei contain the motor neurons which innervate the muscles of the tongue and of the lips. If those circuits are damaged then you can’t make the movements necessary to speak, but you could still communicate by writing because Broca’s area would be just fine.

This made sense until I read the rest of the chapter, which describes how Korihor went house to house begging for food. “Hang on,” I thought. “He shouldn’t be able to chew or swallow if he had anarthria from a brainstem stroke.”

And then it hit me: Korihor had conversion disorder. That would explain his unusual language disturbance, and even its sudden onset in the particular emotional state that he was in. Korihor really did know there was a God, or else he wouldn’t have had a conversion reaction while asking for a sign that God exists.

Korihor’s pseudostroke highlights a fascinating clinical pearl of conversion disorder: the patient’s neurologic deficits conform to their own concept of how the body works, not to the actual neuroanatomy. Korihor apparently didn’t know about Broca’s area, so his language disability didn’t make anatomical sense.

(Here is a question to ponder: what happens when a neurologist gets conversion disorder?)

Illness and Disease, Structure and Function

Illness refers to the subjective experience of being unwell. Different traditions of medicine have different explanations for what causes illness: malalignment of the spine, imbalance of the four humors, altered energy flow through the body, toxins from the environment, deficiency of some neutraceutical, adrenal fatigue, etc.

The disease model of illness in mainstream medicine is an incredibly useful concept. A disease is a pathological process that can be defined and measured in some objective way, like a laboratory value outside of the reference range, detection of a specific microorganism in a body tissue, or something abnormal on a radiology scan. A familiar example is the common cold (an illness), which is caused by a viral upper respiratory infection (a disease). It is also possible to have a disease in the absence of an illness, i.e., an asymptomatic disease. Hypertension and early stage cancer are two examples of this.

The grounding of medical practice in biological science has done a lot of good for a lot of people, and I would never argue that we should go back to the old days of superstition and anecdote, bloodletting, and all of that. But it should be acknowledged that evidence-based medicine has its deficiencies. Unfortunately the disease model doesn’t help us very much when we encounter an illness in the absence of a disease.

Illnesses that are not associated with a disease are called functional disorders. Most functional disorders are thought to be caused by somatization. A patient with conversion disorder, for example, does not have symptoms caused by a change in the structure of the nervous system; their symptoms represent a change in the function of the system. My recent patient with the silly walk had a normal MRI of the brain, and the gyrations of her movement vividly demonstrated the strength of her leg muscles and the exquisite sensitivity of her balance mechanisms. Her structures were intact, but her function was not.

Many doctors and patients have a hard time bending their brains around this concept. The expectation that every illness should be caused by a definable disease can make these purely subjective maladies seem somehow illegitimate.

I once saw a patient in my clinic with double vision. His brain MRI was normal, and his doctor wasn’t sure what was causing his symptoms. After listening to the story I began to suspect that he had suffered a tiny stroke in his brainstem affecting the eye movement circuits. A careful review of his MRI scan did indeed reveal a very small acute stroke in exactly that location, although it was quite subtle and was missed by the radiologist who reviewed the study.

As we closed the appointment and were walking out of the exam room, he said to me, “I’m just glad to know it wasn’t all in my head.”

“But it is all in your head!” I replied. “Didn’t you see the scan we just looked at?”

My little joke made him laugh, but I understood what he meant. It was frustrating and unnerving (literally and figuratively) for him to be in the hospital with very real symptoms but to still not know what was wrong with him. Having a bona fide pathological process to explain everything really validated his illness.

It’s All in your Head

But patients with conversion disorder can be just as disabled as those with structural brain diseases: pseudoseizures and epileptic seizures lead to the same driving restrictions, a patient with functional blindness can’t see any better than one with organic blindness, etc. Functional deficits are as real and as bothersome to the patient as if those neurologic circuits were actually damaged.

But the experience of being unwell is a cognitive, perceptual experience, whether it is caused by an identifiable disease or not. And those perceptual experiences all happen in your brain, whether or not the illness is primarily or exclusively a disorder of the mind. So really it’s all in your head either way.

In my clinic I tell patients with conversion disorder that their illness is real, that their suffering is valid. I do whatever I can to help them understand their diagnosis so that they will have the best chance at recovery. Patients who can’t understand — or won’t understand — tend to do worse than those who accept it and move forward with their lives.

Maybe there’s a lesson for all of us in that. Whatever your problems may be, whether they seem real or imaginary, accept them and move on. Some things will get better, and some things won’t. Do what you can to improve your situation, and trust that God will make it all right in the end.

Alan B. Sanderson, MD is a member of The Church of Jesus Christ of Latter-day Saints and is a practicing neurologist. PET image of the brain by Jens Maus.

I Didn’t Make That Mess in the Clinic Bathroom

A Recipe for Gethsemane

An Atheist, a Jew, a Muslim, a Japanese Man, and a Member of The Church of Jesus Christ of Latter-day Saints Walk into a Bar

One reply to “An Introduction to Functional Disorders”